The scientific and technological development of the 3000m-class submarine robot sea-testing task undertaken by the Yantai Salvage Bureau of the Ministry of Transport successfully ended on the 9th, indicating that China has already had a 3000-meter deepwater salvage capability. 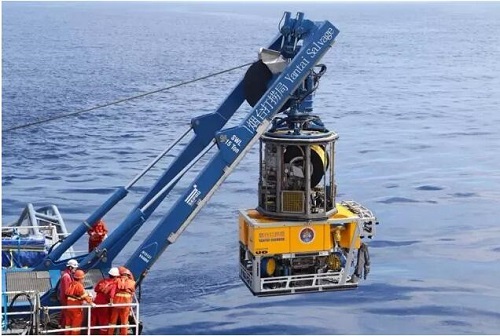 China's deep-water salvage has completed a sea trial with a breakthrough 3000m underwater robot (China News Network image)
According to the Yantai Salvage Agency of the Ministry of Transport, at 18:20 on the 9th, the five-day submarine robotic mission of the 3000-meter-class underwater robot was completed successfully as the â€œDeweiâ€ wheel slowly entered Shenzhen Chiwan Wharf. In this sea trial, the maximum depth of underwater robots reached 2,951 meters, indicating that China's salvage system has a 3000-meter deepwater salvage capability and achieved a new breakthrough.
According to reports, this sea trial has no mature experience in China's traffic rescue system. In the face of huge challenges, Yantai Salvage Agency organized internal and external technical personnel and experts to conduct seminars and reviews, and finally formed a scientific and feasible sea trial program that was in line with the characteristics of its own equipment. In addition, the sea test was conducted at a water depth of 3,000 meters, and the traditional anchoring method could not complete precise positioning. Yantai Salvage Bureau selected the 12000 KW high-powered tugboat Deqin with two dynamic positioning systems as the working mother ship.
At the beginning of March this year, the preparation for sea trials was officially started. After one month's efforts, on-site technical staff completed the related work such as land testing, equipment mobilization, on-board assembly, and joint system adjustment.
On April 5th, the "Deqi" wheel was set to carry the underwater robotic equipment and sailed to the South China Sea for a sea trial location. On the 6th and the 7th, the underwater robot launched two times successively. The maximum depth of the underwater diving was 1180m and 2951m, respectively, and a cage flight was performed. The pressure resistance and stability of the equipment were successfully tested.
On the 8th, the underwater robot conducted the third launch test. After an hour and a half of dive, when the water depth was 2735 meters, the underwater robot successfully reached the bottom of the sea. According to a predetermined plan, the underwater robot flew away from the umbilical cable management system and performed 600 meters of underwater flight. At the same time, technicians manipulated high-precision manipulators and placed signs on the Yantai Salvage Agency of the Ministry of Transport in the South China Sea. Subsequently, the technicians tested the main sensors, auxiliary equipment, mechanical hydraulic system, communication transmission, and automatic control system of the underwater robot. All performance and parameters were normal.
At 18:30 on the 8th, after the underwater robot completed all the test items, it began to return to the water surface, and the water came out smoothly at 20:00. According to the technical personnel of the Yantai Salvage Bureau, the underwater robotic equipment will be officially delivered and used. The Yantai Salvage Bureau's ability to serve the nation's ocean power strategy and deepwater ocean engineering development has reached a new level.
It is reported that the Yantai Salvage Bureau 3000m class underwater vehicle is a national key investment equipment with a spindle power of 200 hp and a working depth of 3,000 meters. It can maintain a positioning accuracy of 10 centimeters below the seabed with three knots of flow velocity, and is equipped with double seven-function robots and torque. A series of advanced equipment such as spanners, multi-beams and side-sweeping sonars can perform various deep-water salvage search and marine engineering tasks within 3000 meters.